Things are looking up for "papi" (a nickname from one of my bartenders, Austin, whom I love to pieces). I spent the, will go o close of the bar, with Jake, the manager, and can actually say I think I can do this! While he was counting out his till, I spent the time going over the food shopping and liquor shopping lists. The one thing I am truly good at is shopping.... anyhow, I figured the liquor out myself, Devin, our head cook, made out the food shopping list for me. Anyway, I know what I need, and tomorrow morning go and get the items needed at the "Cash and Carry", and get those things off my list! That and I had a really good time with Jake bullshitting about the bar business, restaurants and other non-related stuff. I actually for a second felt happy and secure with myself, something I haven't felt in a long time. that and I got a text from mone of the bartenders, Nell, my goddess in blue jeans,saying how much she appreciated me and our "dysfunctional family" and everything I am doing running the bar... small potatoes maybe, but hearing it from a seasoned veteran like Nell means so much! Anyway I feel the best I have felt for the last couple of months so for that I am grateful!
Posted by Robj98168 at 2:07 AM 1 comment:

ne thing I am slowly learning is no one cares how I am feeling. Not the employees certainly not my customers, and pretty much everyone else. Oh they say things like "Oh you need to get your rest" or "remember to take care of yourself". But mostly it is indifference to me and anything I really need. All I know is I have to take care of myself because no one really cares. I have my two dogs and they love me. And for now that is enough. If I have a really bad day, some of my so called friends like to see how far they can push me until I break, then get all defensive on me when it happens. That is total bull shit. Recently I made decisions in business, like cancelling our weekend brunch, because, A- it doesn't generate enough income to override labor costs, and B.- I don't need the stress. And that  is all good and fine until one of my employees, decides... No more Eggs Benny? That's right mother fucker. My mental health is more important than if you get your favorite egg dish on Saturday or Sunday. Sorry if that seems selfish or I am ranting, but fuck it. I need to take care of me right now.
Posted by Robj98168 at 10:31 PM No comments: 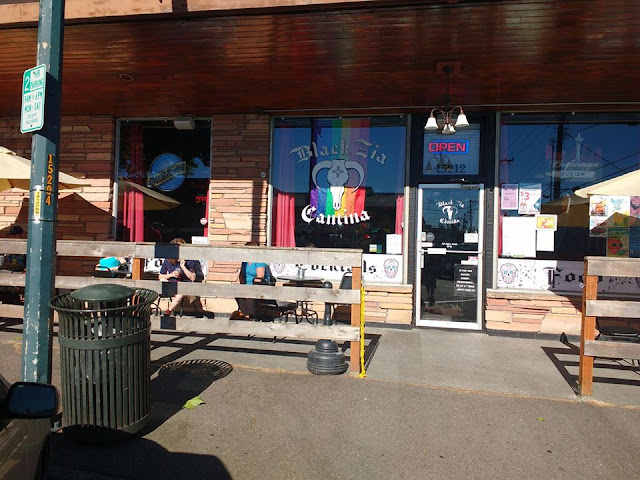 Well let me update you on what's new in Rob's World. Here I was, 50 something, happy, retired and so what do I do? I buy half a bar in Burien. The Black Zia Cantina is a "New Mexican" cuisine restaurant and bar.
WHAT IS IT LIKE OWNING A BAR, ROB?
Nothing like it I have ever known. I am now responsible for other people's livelihoods. And that means I get to be Daddy, Mommy, Aunt, Uncle and Boss. And so much other legal responsibilities. But hopefully, I am ready for it. And after dealing with employees, customers, fellow business owners, I must apologize to my Junior High school Vice Principle. (That is what I equate this to). I now know what the hell we put you through. I am so sorry, Mr Lopresti!
But  seriously, it is a lot of work. I have gone from 8 hours a week as a retired craft artisan to a bar owner/manager/bartender 50+ hours a week. And that doesn't include being a dishwasher, somewhat cook, delivery person et. al.
SO YOU CHANGING IT INTO A GAY BAR, ROB?
No. This would be cool. But I like to think of Black Zia as an Everybody Body. We have a sign in the window the states "If you are Racist, Sexist, Homophobic or an A**hole, don't come in. And I am good with that... since taking over, We have put on Drag Shows, hosted a Gay Pride After Party (Burien had it's first Gay Pride celebration! I will post more about that later!) and done a few things that put the bar out of the norm. Something Black Zia has always been known for, as well as being the center for Punk, Hard Rock and metal music in the city. That and our famous Summer-Ween and Halloween Parties! (Everybody likes to get dressed up!)
So now Rob's World is pretty much about the struggles and Victories of owning a little bar in Burien, my fair city!

Romeo and Buddy Bucko
HOW MANY PEOPLE HAVE
VISITED ROB'S WORLD?